Up at just after 6am for pages. I was up before anyone, and wrote my pages in the Moroccan alcove.  I am enjoying the profile of this part of the walk, the rolling hills and farming countryside: completely pastoral. The morning light creeps in the windows as I write. A fly buzzes around – isn’t it too early for that?  All is well.

I thought it was a late start after breakfast, but actually not so. We left at 7:45am.  I departed with Virginie and Sophie and walked with them all day after they took a lovely photo of me and Martine.

I collected the figs from the trees I’d staked out the day before. It was a cooler morning. Cows, goats and walnuts accompanied views of the Pyrenees.  All the dogs in L’Isle Arne barked for us. On the outskirts we passed an old farm with some pretty special architecture. Apparently, the more layers of tiles on the roof, the more wealthy the inhabitants. You could see the number of layers near the eaves.

Stones in stoby poles appeared again, just to remind us we were still pilgrims.  We had some great undercover tracks at first today. 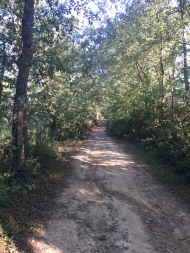 There was a lovely church at Lussan where we stopped for a pee.  The man who had stayed at Martine’s the night before with his grandson had caught us up. Five pilgrims at once! A little further on, after Virginie was trying to convince me that the rolling hills reminded her of the TV series, Little House on the Prairie. I wasn’t convinced – I’d only read the book, and imagined a prairie as being quite flat and desolate.  She even sang the theme song to it, but I’d never seen the visuals so I couldn’t be convinced. (Virginie sent me the YouTube when she got home, and I had to concede, our walk on this day matched it perfectly). Nothing proves US imperialism more so than an French person saying their country reminds them of a prairie! 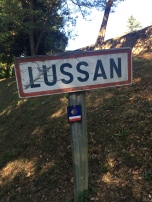 Our conversations and songs were wide-ranging walking through the farm paddocks. I got another French song reference which I’ve had to wait until now to listen to – Jean-Jacques Goldman’s Je March Seul.  Interesting his name is Jacques. There’s something about French pop hey! How would I know the lyrics would be so pertinent:
Je Marche Seul – Jean-Jacques Goldman 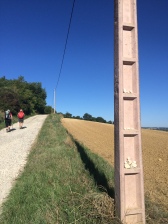 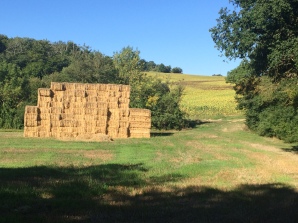 I asked what the little bean bushes are that I have been seeing for a number of days and which today stretched across paddocks as far as the eye could see. They are haricots vert green beans known as flageolet (not to be confused with a woodwind instrument). They are picked very early, before they are fully ripe.   At the edge of a field, and right near a huge stack of hay, we ate morning tea. The girls shared their butter biscuits – yum.
I saw one La Poste vehicle today. More figs. There’s a fine line between pleasure and pain and I found it today picking blackberries.  We later climbed a single person path up a long hill next to a field and then took a high path studded with many baby oak trees (petite chene) and sauterelle (crickets). This had me singing the song I’d sung so much in choirs in the past – El Grillo by Josquin des Prez … again!

We would follow this path marked by broken tiles in the full and hot sun, right along the ridge and then down into Montegut – a cute town with amazing chateau behind tall gates.  But before we reached there, we stopped at a lookout spot where we could lunch in part-shade with the chateau turrets in view. Champignons kept us company for lunch and I ate my luke-warm cassoulet.  It wasn’t that nice – it would have been better warmed in a microwave as it was designed to be. 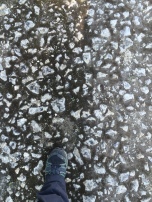 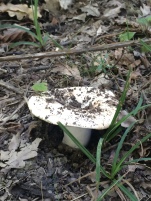 After a break, we descended past what looked like a local version of calvary – three reminder crosses.  We ambled into the little town, trying to work out whether we were going in the right direction. I was pretty keen on finding a toilet. We found a public one – a very public one. You know those horrid dreams, probably easily classed as nightmares, where you have to go to the toilet and there is no door. Well, once you’ve done this for real, I suppose you don’t have the nightmares any more.  The town was deserted, and there was really no risk, but it is an interesting experience. Leaving out of the other side of town, making our way around the little road below the chateau, we saw a pigeonnaire which was quite spectacular. 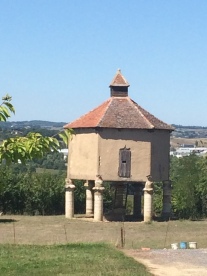 It was really hot now, and we made a big bitumen descent away from this little hill town. Ouch, my knees. We made our way toward a major road, and crossed a railway line.  We could see Auch cathedral for miles – hours before we got there, but it was quite a slog walking the last 4 or so kilometres. We started to get nice big signs although the map in my Miam Miam Dodo seemed really wrong! 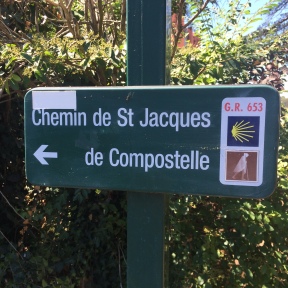 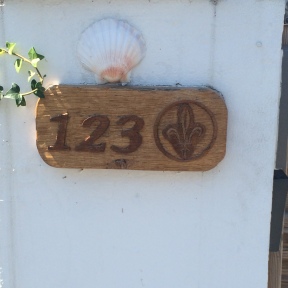 It was nice to have company today! Although by the time we had about an hour to walk, I was getting grumpy and just wanted to be there.  This is the time I feel like I’m not great to walk with, but I suppose that is natural.  We had a small stop in the Parc du Couloume where we also refilled our water bottles. From here it was a direct walk along a busy river path towards the city.  Getting close, I decided I would make a beeline for the Office of Tourisme, whereas Sophie and Virginie said they’d go another way.  We parted. 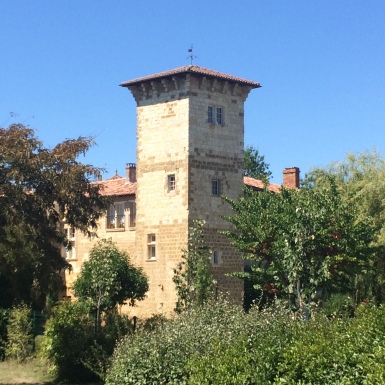 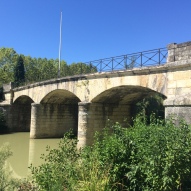 All day we’d experienced patches of gorgeous architecture juxtaposed against the natural beauty of the land. Reaching Auch was the pinnacle of the built landscape. This beautiful town, the centrepiece of which is the Basilique Cathédrale Sainte-Marie d’Auch, is a renaissance dreamscape. The Office de Tourisme is magnificent – a C15th marvel. I visited to seek information about the presbytere that welcomes pilgrims, to book the next town (L’Isle de Noe) and get wifi. I tried unsuccessfully to get wifi to work, so made my way to the accommodation.

I opened the door, and introduced myself to the older woman who was there with the stamp for my credential and some helpful tourist information.  Cloudine and Francois arrived at the same time, and we were shown up together.  Up four flights of a very large staircase we entered through a small door with a class window covered by a curtain. There was a small room just off the entrance passage so I took it as it had one bed.  C & F found another room which was pretty self contained closer to the bathroom and kitchen. This left quite a big room with a number of beds between us. On the wall was the donativo (donation) tin. There was a balcony of kinds off the large room, and reached through the kitchen. When you walked out onto it, and looked back towards the kitchen, there was the cathedral. The view to river was similarly spectacular.I washed myself and my clothes as usual, then went out to see the town. 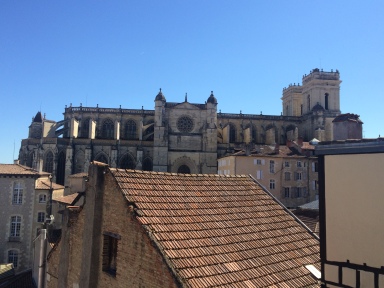 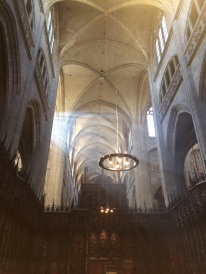 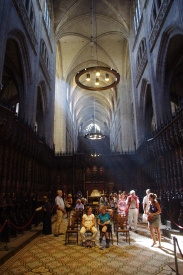 In the cathedral I bumped into Virginie and Sophie – they had found their hotel.  Cloudine and Francois came in a little later too.  The 113 carved wooden choir stalls need to be seen to be believed, and to see them all you could stay for hours looking at the 1500 carvings. Every character has been lovingly carved and their faces are highly unique – a feat apparently achievable because the wood was submerged for many decades in the Gers river rendering the wood carvable in great detail. I think it would be difficult to concentrate as a choir member.  And at the end of a very long walk, it was almost overwhelming to me. 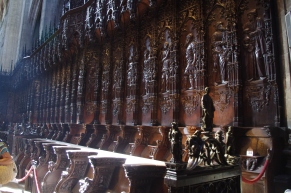 This cathedral also holds a famous St Jacques window so I had to souvenir this.

I had got a map of a trail around the town, so I went off to do it, starting at the back of the cathedral at the top of the Escalier monumental (Great staircase) down to the river that half-way down was the home to the bronzed d’Artagnan. Around the side of the town, I walked past Henry IV’s house where he had reportedly stayed with Catherine de Medicis. Up toward the centre of town again, past the library and Jacobin museum, I decide to get food for tomorrow, and then went back to eat some dinner at the presbytere. 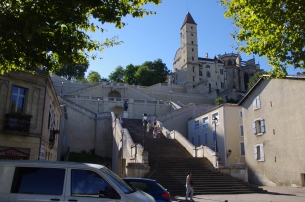 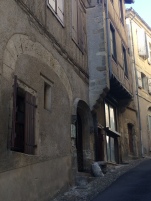 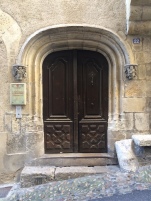 I tried unsuccessfully to send a Skype recorded message to my sister at a nice restaurant/bar where I sat for a long time using wifi and another cafe gourmand.  I’m feeling sad it is the end of an era with Sophie, Virginie, Yves, Francois and Cloudine. Yves leaves tomorrow to go back to Nantes. The others will be walking different distances to me tomorrow so I’ll be alone again. I walked back to my accommodation and went to bed. 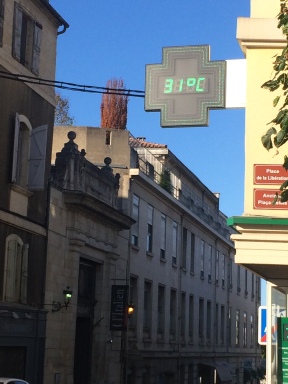 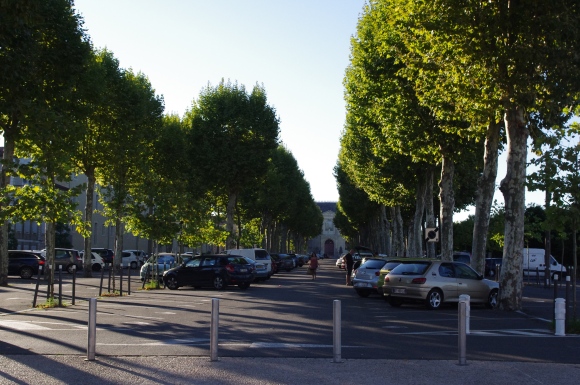 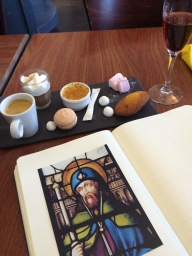