Today was the first day for several weeks that I’ve slept in. My sleep was unsettled again during the night, but I rested a little. Actually I was cold, and that never bodes well for a good sleep.  I got up, dressed, went upstairs for brekky at 7:30am – maybe not what some may call a sleep in! Benjamin, Jose and the other guy weren’t far behind me.  Nieves was up and doing her English homework which I had a look at, but decided it was far too hard for me, and told her she was doing extremely well to even be tackling it. 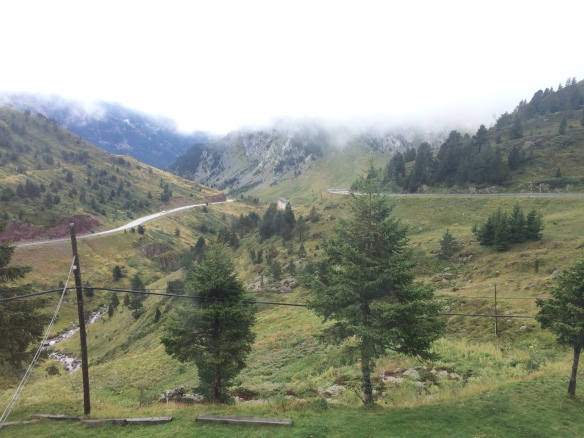 After breakfast, one by one the pilgrims said goodbye. Jose, then Benjamin and the other guy.  I wanted to do some more writing of my journal and then leave. At about 10am, the dogs were howling with a huge thunderstorm outside and I was delayed.  I felt relatively safe in staying as it was only a short downhill walk today to Canfranc.  I caught up with emails, and chatted on the internet with friends. It was actually a perfect start to the day.  The rain eased gradually, and then the fog lifted and I realised I needed to leave. It took me only a few minutes to pack – I’d already left my mostly full pack upstairs in the entrance hall.

Nieves gave me a gorgeous pin as a souvenir. I left, jacket on, and walked out into the fog. The path was all purple today and once again, wet.  The marker said 858kms to Santiago, but I was glad I was only going 6kms.  Before long I left Aysa to disappear into the fog and I was walking over purple rocks with iridescent green moss – it was beautiful.  In-between fir trees it felt like classic Europe.  Still little crocuses appeared on the ground as they had yesterday, but it definitely felt like a different environment to the valley I’d walked up.  I couldn’t hear it from the chalet, but in the valley below was the raging river, Rio Aragón. It gives it’s name to the next stage of this walk to Puente La Reina.  There was a big area that looked like the product of a landslide – but maybe it had been constructed to make a good ski run.

It was a very narrow path down to the Hôpital de Sainte Christine.  I spent a little time reading the information boards and then left and emerged onto the roadway which was flanked by snow sticks to mark where the edge was when it was covered with snow I presumed. 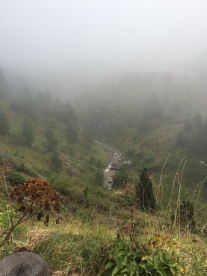 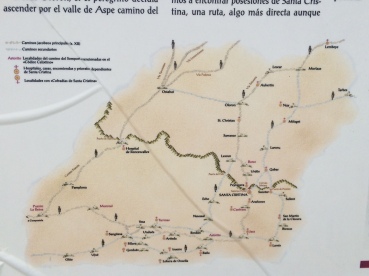 I then turned left up a dirt path, then onto a small bitumen roadway and voilà! I was walking head-on into a sheep orchestra again – it was like a stampede and included one solitary black sheep.  Very cute and very funny they were.

The road into Spain was filled with many amazing views and landslips.  There were a trio of older pilgrims who had called in to Aysa for a Col du Somport tampon just as I was considering leaving. They’d arrived by bus to start walking from there. I think many pilgrims come in for the stamps at Aysa – the beginning of their Santiago trek. I kept following the signs, although many times it felt like I was on the wrong path because I saw the trio on the other road in the distance.   More beautiful views, cute paths and staircases.  New way markers greeted me – big, clumsy yellow ones and the same red and white balisages I’d grown very accustomed to.  I would still not even see a half of the mountains though for the fog cover. I thought about it as I descended. Sometimes we just have to be content knowing that something is there, despite not being able to see it.  I came across a paddock of horses, just past a giant purple landslide. Sometimes the little walking people on the signs didn’t point the right way. 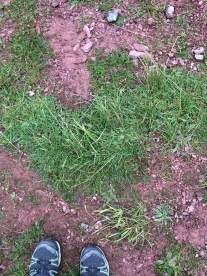 First cattle grid crossed in 45 days. More forests and purple dirt.  Loads of mushrooms under pine trees.  A little hut like a hobbit house. A purple river made from storm water.  Today I found the Camino crosses the middle of paddocks – a foretaste of what is to come perhaps – I think I only crossed one middle of a paddock in France.  Biggest pile of rocks so far. 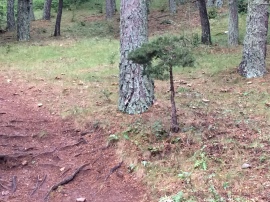 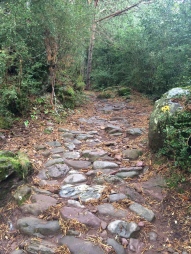 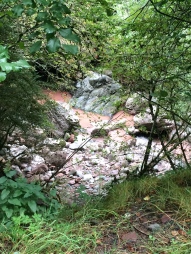 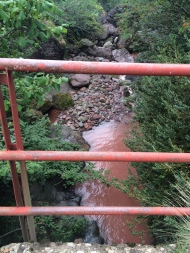 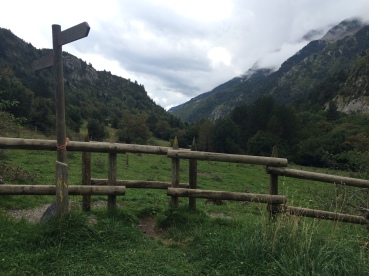 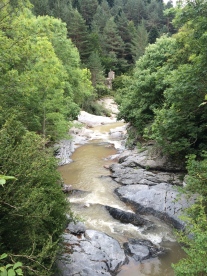 Near the town, I came upon the 3 amigos on the main-ish road – all paths lead to Canfranc Estación. 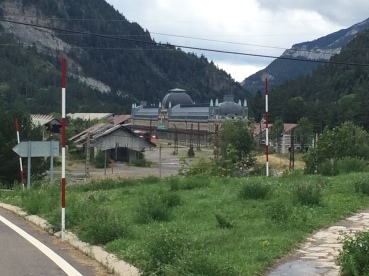 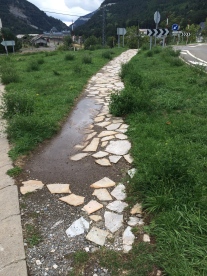 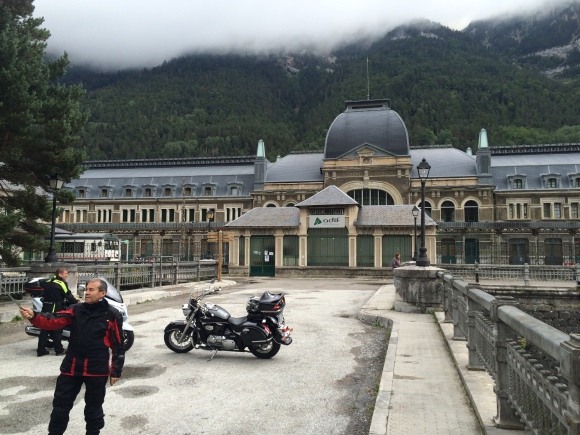 After a little more than 1 1/2 hours of ambling, I was approaching the town. The old Somport rail tunnel entrance on the outskirts of town was gorgeous. Mary is once again everywhere – she made it to Spain too, and watches everything here as well.  Plaza Aragón – conjures up my images of medieval times. I was seeing lots of accommodation options, but I thought I’d continue to find the albergue. I passed the station and saw that it really is awesome. Matthieu was right, and I was glad I took his advice to come here.  It is apparently the 3rd largest station building in Europe. I’ll go tomorrow morning and get more photos of it, sans selfie stick!

The town has a slightly weird feeling, maybe even a Twin Peaks feeling.  Like deserted skiing towns everywhere I suppose, deeply tucked between huge mountains, Los Arañones and Las Iserias (I think judging from my map) it is quite dim, especially with foggy cloud cover.  I found a place to eat lunch – they had a pilgrim plat for 8.50Euros. The primo would’ve been sufficient – a whole big plate of pasta.  Then I had to have chips and chicken fillets – very thin, like I’d had for dinner last night.  I couldn’t eat it all and I think they thought I was a bit strange.  The TV was blaring to keep the staff and the customers entertained, although there was just me and another couple still eating lunch. You know you’re in Europe when you’re sitting in a restaurant and the TV ads show a weekly collection of books to buy – about great philosophers! Australia – we wouldn’t want to be bothered by the inconvenient truth that there might be other ways to handle our problems. It felt strange that I couldn’t speak any Spanish, and I think it affected my impressions of the place, as the locals certainly didn’t speak any English. Hmmm.  I really let go of my safety blanket by walking into Spain.  It took me back to my early French experiences where I felt like a bumbling idiot – even more so than I still do.  It made me realise just how far my language comprehension and speaking had come and I was missing being able to at least start a conversation with shop keepers and wait staff. Spanish isn’t on my list at this stage, so it will only be a short foray into this country, as I don’t like travelling to countries where I don’t at least want to learn the basics.  A sad indictment on me I’m sure, but I can’t change what I feel is right at the time. After my meal, I set off to try to find the albergue that was the cheapest on my list.

Continuing to the other end of the town, I asked directions and found the Albergue Juvenil de Canfranc that looked open (there was smoke coming from the chimney), but all shut up.  I asked two women out in the street how I might get in. One of whom turned out to be the librarian, of course! I love librarians :)!  The library was across the road. Silencio, bibliotheca. What greets me on the library door at the top of a flight of stairs, but a gigantic poster of mushroom species. This made me smile. After all this time, I can finally find out the species I’d been seeing for all this time. The library was a cute little one-roomed number and the librarian said I could wait while she phoned the host. They said they’d come and open up shortly.   The holdings amused me – I wondered whether Paula got in Cannibus magazine for her Rockdale library? It was not long before I was able to go across the carpark and get settled.

The albergue is modern with a fireplace/common room/dining room downstairs and a couple of lounge chairs around the edge the room. There was another school group/youth group of people who would be fed dinner, but dinner wasn’t provided for pilgrims on this day. Rooms are on the 2nd floor under the sloping roofline, so I bumped my head on this a few times.  I was exhausted by my ‘mini-walk’ and my big 3pm lunch, so I lay down for a while.  Later I went to access wifi downstairs. Later still, I walked up the road to the little supermarket and got yoghurt and pears for breakfast.  Next door I had the thickest and yummiest hot chocolate I’ve had in my life at the Cafetería Universo while catching up with the day’s journalling. As I sat there, the restaurant got more and more packed. By 9.15pm, when I left, it was really ticking over.

At 9:30 I walked back and to bed. The Spanish trio were in bed already and hopefully I didn’t wake them.