In the chapters of the book of my life, there are a number of leit motifs – common little elements that appear again and again. Some are musical, some are experiential and others are books. Sometimes all it takes is for one unsuspecting radio program to remind me of one.

It happened again on the 22nd December while listening to the Radio National Summer School program. Zoe Norton Lodge and Mark Sutton went in search of the definition of The Novel, then in pursuit of the earliest example.

The classics were noted, experts consulted, much conjecture ensued and the centuries slowly wound back before the conversation turned to the obscure (to some), The Tale of Genji by Murasaki Shikibu.

I have never read the tome, but it has been in my consciousness since 1992, when it began to sit on the shelf of a long-term relationship, beckoning to be read along with Kurt Vonnegut’s Galapagos and Emily Bronte’s, Wuthering Heights.  The Bronte I got to, but the others not so much.

I continued to fail to understand the significance of the The Tale of Genji but it made its presence felt again when I moved to Sydney in 2006. I couldn’t help but notice, and was fascinated by, a fellow Stanmore station commuter’s familiar brick-like choice each morning. It was the most unlikely work commute book I could imagine – it is around 1,100 pages long. I was always tempted to strike up a conversation about it for this fact alone.

When I visited Japan in 2012 for a Suzuki music conference in Matsumoto and had the opportunity to add on another few days in Kyoto, I was looking for things to see. The little river-side town of Uji caught my attention, not only as the centre of the Japanese green tea universe and its World Heritage-listed shrines and temples, but also because it was the scene of several of the chapters, the last ten to be precise, of The Tale of Genji. There it was again, that book!

According to the travel guides, Uji is also home to a museum dedicated to the story, two monuments on the edge of the river and a discovery trail (I’m ever so fond of a treasure hunt).  So, still having never read the book, I set out to educate myself about this significant story and possibly sample the green tea.

I’d made quite a late start, having dropped in to some other shrines and temples on the way to Uji that morning. I’d caught the train, and I knew I was in the right place given the sign greeting me near the station. Now I just needed to find the start of the trail. 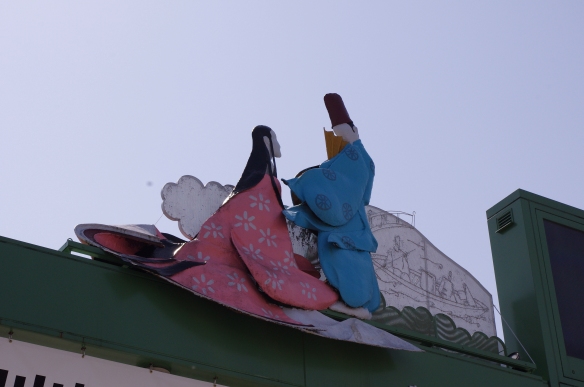 However, I needed an ice-cream refresh first. When in Uji, do as they do and eat their green tea icecream. After giving myself brain freeze, I found the trail and set off across the Kisen-bashi Bridge to To-no-shima Island, then continued to the other side of the river via the Asagiri-bashi Bridge, following the little brass plates in the pavement. 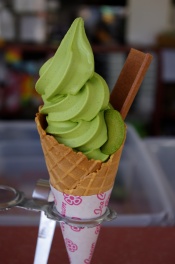 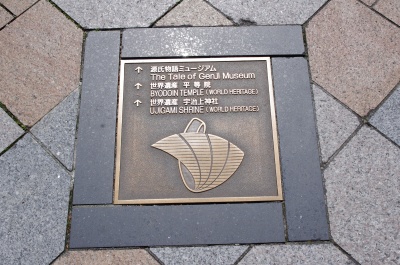 Just on the other side of the river, there is a monument to the chapters of the book that are set in Uji.  Here the lovers, Ukifune (meaning floating boat – or maybe floats my boat) and Prince Niou-no-Miya, are shown in a boat on the Uji-gawa River. Hikaru Genji has long-since died, but his son Kaoru and the Prince vie for Ukifune’s affections and she eventually jumps into the river to escape. This is clearly 11th century high romantic drama of epic proportions. 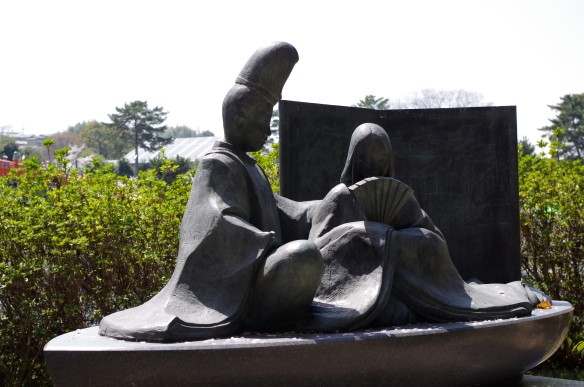 Walking along small shady pathways past more shrines and temples, away from the main food and commerce area of the town, in time you arrive at the The Tale of Genji Museum. It provides a multi-media experience of the story and the “glamourous world of the Heian imperial dynasty”. It also has a great Japanese cafeteria and gift shop all housed in a  modern building, set in well manicured Zen-like gardens. Throughout the complex, every opportunity is made to reference the story, from the lunch trays to the lamps. The quality of the museum equals the apparent reputation of the book which Royall Tyler (interviewed on the program and one of the many translators of the book) described as a being a ‘flagship’ or ’emblem’ in Japanese literature. 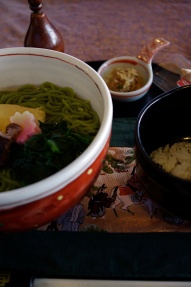 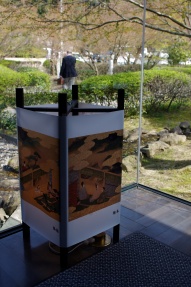 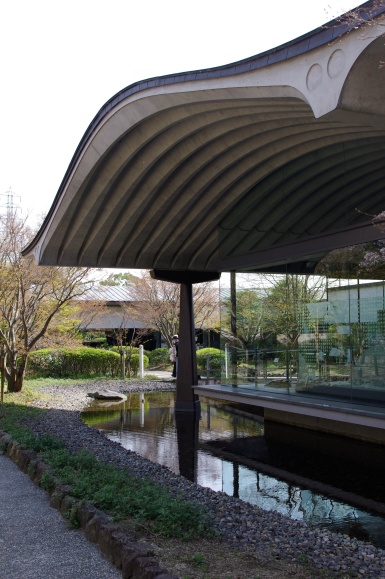 Arcing back around into the town, you re-cross the river again via the Uji-bashi Bridge and a monument to the author, Murasaki Shikibu. Until I went to Japan, despite bumping into it a number of times, I never realised that ‘the first novel’ was written by a woman.

Murasaki was a born into a previously aristocratic family, and descended from a family line of notable poets. She wrote a diary, a volume of poetry and The Tale of Genji while a noblewoman in Kyoto. 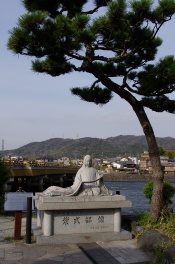 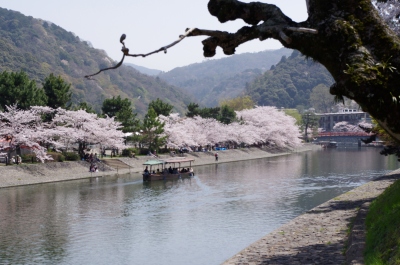 Uji has a beautiful name and during sakura (cherry blossom) season, its vistas certainly match it. From the overgrown, bonsai-shaped trees to the narrow streets lined with gift-shops, tea houses and restaurants, there is plenty to see here, and it could easily fill two days or a lazy three days in your Japanese itinerary.  I felt a little rushed and it was hot in the afternoon, so I’d recommend wandering the trail early and taking in the shrines and temples in the afternoon. Whilst the area is quite traditional looking, it was still hard to imagine what this place may have been to the courtly writer or her protagonist.

In the late afternoon, I availed myself of a sweet ginger drink – a kind of ‘still’ ginger beer which was beautifully refreshing. I had a brief shop in a gift-shop where I bought the most exquisite threaded earrings (that’s a blast from the past – I wonder if that craze swept 80s Japan too) and in the evening, went back to a little restaurant in the middle of the ‘suburb’, surrounded by houses. I was early for dinner and I sat at the bar watching the chef assemble my little tray of delights. The food (as most is in Japan) was perfectly presented and of elegant sufficiency. 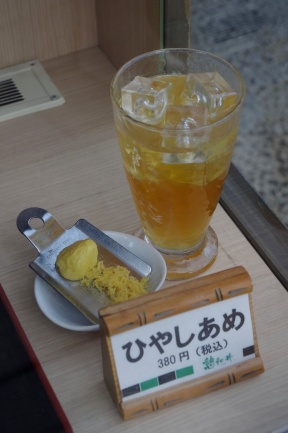 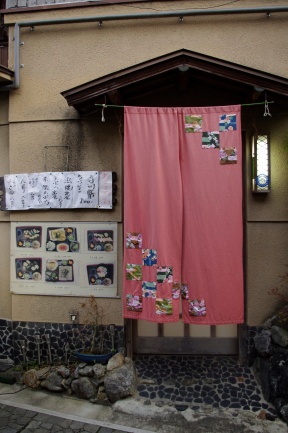 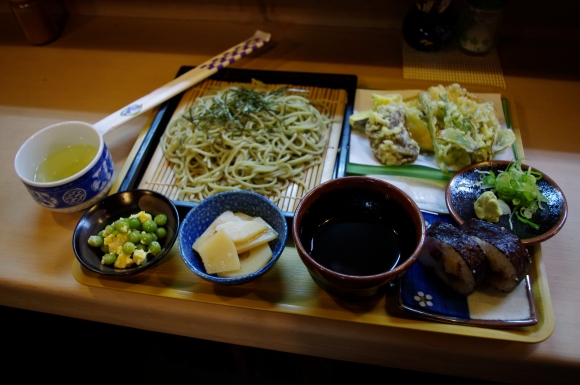 It is interesting to note that my latest little bump into the The Tale of Genji just confirmed what Royall Tyler said of it – “The Tale of Genji is more discussed, than read”. While I was listening to the radio conversation unfolding, I thought to myself, I wonder when it will next make its way into my life!

Uji is 20-30 minutes (depending on which train you take) from Kyoto on the JR Nara line. Cherry blossom season is around the first week of April in Kyoto – but check the internet for the forecast for each year.